Snapshot of eSobi Mobile for Android 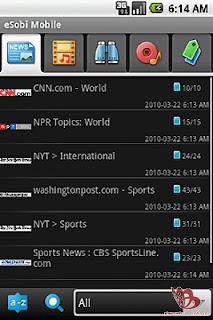 Email ThisBlogThis!Share to TwitterShare to FacebookShare to Pinterest
Labels: Android

Snapshot of Galaxy U after setting some applications.

Minimal screens (three) are used and daily bible is my best app.

Taking screenshots on an Android-based phone 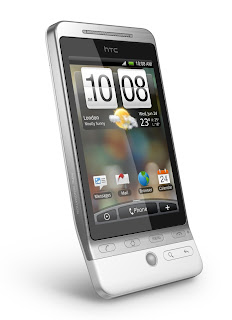 Even before playing with the new Android phone, the T-Mobile G1, we knew that we would need to be able to take screenshots of the phone itself. Using a digital camera to capture screens externally just wasn’t going to cut it. Because the Android platform is open (and now, open source), I really didn’t expect this to be a problem. If anything, I thought there would be a way to take screenshots directly from the device like you can with the iPhone and iPod Touch.

Alas, we discovered this is not the case. After scouring Google trying to find answers, we asked Engadget’s Editor-in-Chief Josh Topolsky what they used for the screenshots in their review, and he was nice enough to fill me in on the details.

Warning: right now, taking screenshots from an Android device requires installing the SDK. That doesn’t make it as simple as pressing a button, but it’s not the end of the world. If you’ve got a few minutes, and a quick connection with which to download the SDK, we’ll show you how to take delicious Android screenshots of your own.

On your Android phone (in this case, the G1), go to Settings, then Applications, and then Development. Check the checkbox for “USB debugging.”

Download the SDK for your platform here. Google also has some great installation documentation if you get lost. You will need to make sure you have a current copy of the JDK. To use the SDK, you also need to download an IDE like Eclipse. After installing Eclipse, you can install the Eclipse plugin to connect Android and the IDE together, or just do a lot of stuff via the command line.

Go ahead and plugin your Android handset into a USB port on your computer, if it is not plugged in already.

After configuring Eclipse or whatever IDE you use to work with Android, you need to open up the DDMS application from within the “tools” folder in the Android SDK’s main folder.

After DDMS launches, select your handset from the menu on the left (it should be the only device listed). You might see an error message, but the debug tool should be loaded. Then, click CTRL-S on your keyboard. This will bring up the “Device Screen Capture” interface. From here, a static image is captured from what is appearing on your handset. You can save the image (nicely defaulted as PNG) and then refresh to your heart’s content to grab updated or different screenshots from your phone. 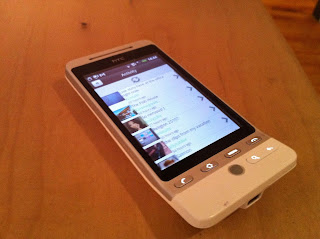 HTC Magic: a Snapshot of the Android Phone
There are a lot of things one can say about the HTC Magic but since most of the people have the attention span of 5 year olds, here’s a snapshot look at the mobile phone.
The Look from the Outside
The HTC Magic has dropped the G1’s QWERTY keyboard and instead, has an onscreen keyboard much like the Iphone. This move has given it a very smooth finish and has certainly added to its aesthetic appeal. It is definitely thin and is very lightweight. Its outer shell, although plastic, is very sturdy and fits comfortably at the palm of your hand. It also has a very beautiful 320×480 touchscreen that is very responsive and a pleasure to use. It also has a trackball at the bottom of the front to give you a different way of getting from one point to the next. It also switches from portrait to landscape quickly.
Basically, its look is very graceful and is certainly something that should attract a lot of people. The very sleek and curvaceous design is certainly an improvement from its ancestors.
The Look from the Inside
The HTC Magic is working on the Android operating system and allows people to access the multitude of Google services like Google Maps, Google Search, and even Youtube. The interface is a joy to look at and is quite easy to use. It also has access to the Android Market and thus, to hundreds and hundreds of mostly free applications. Plus, the advanced version of the Android Os, which is endearingly called “cupcake,” has a lot of feature improvements that gets it closer to Apple’s OS intuitiveness.
It also has a 3.2 megapixel camera that has impressive capabilities in image and video capture. Plus, thanks to its access to Google Services, one can even upload videos directly to Youtube. It is also equipped a WebKit browser engine and a JavaScript engine that gives a respectable browsing experience. It also has other features like Bluetooth and Wi-Fi Connectivity.
The problem is that it lacks a 3.5 mm headphone jack, is short on memory and its battery life can use a bit of tweaking. Certainly, there are some things that need improvement but as it stands, it is still an above par mobile phone.
The Verdict
It is certainly a good smartphone, not a great one. Its pros greatly outnumber it cons but unfortunately, these cons are major considerations by buyers when purchasing smartphones. It may not be the best smartphone in the market today but the HTC Magic definitely has a lot to give to those willing to endure its faults.
If you are looking to purchase the HTC Magic then Moby1 is well worth a visit. They compare mobile phone deals from a wide range of online retailers. They also Compare mobile broadband ensuring you are always connected.
Email ThisBlogThis!Share to TwitterShare to FacebookShare to Pinterest
Labels: Mobile Android Phones